Continued from the story, ‘Banaras: In search of faith, fervor and spirituality’

It is said that a trip to the endlessly fascinating Banaras must begin with a visit to Kaal Bhairav (a fearsome manifestation of Shiva) temple. My first destination was, therefore, Kaal Bhairav Temple.

The hotel owner, Mayukh Jaiswal, helped me get an auto to reach the temple which was 2.7km away from where I was staying. On my way, I saw the streets crammed with pedestrians, hand-pulled rickshaws autos, totos, while harried cops were trying in vain to bring some semblance of order to the streets. Well, if you really want to feel the pulse of this temple town, you’ve to walk through its numerous lanes and alleys.

Kaal Bhairav, the ‘Black terror’ is widely known as the kotwal, the ‘police chief’ of Kashi and the place where this temple is located is known as Kotwalpuri. The temple opens at 5am and closes at 1.30pm and again remains open from 4.30pm to 9.30pm. ‘Kaal’ means both Death and Fate, in addition to meaning Black. He has also assumed the duties of the God of Death in Kashi.

It took about 20 minutes to reach the temple. The entrance is extremely narrow and painfully congested. I waited for about half an hour, braved the crowd and finally saw the silver face of Kaal Bhairava, garlanded with flowers, visible through the doorway of the inner sanctum. The rest of Bhairav’s image—said to be pot-bellied, seated upon a dog, holding a trident—is hidden behind a cloth drapery.

“Bhairava is the hero who overcame the worst of sins and who conquered the grotesque, ever-present skull of death. In his pilgrimage to Kashi, Bhairava achieves that for which all pilgrims hope: freedom from sins and from the fear of death,” says Diana E. Leck in her book, Banaras: City of Light. I came out of the temple and ambled my way to the place where the auto driver was waiting for me.

It is said that in Kashi, Vishwanatha is the King, Annapurna is the Queen and Kaal Bhairava is the Governor. 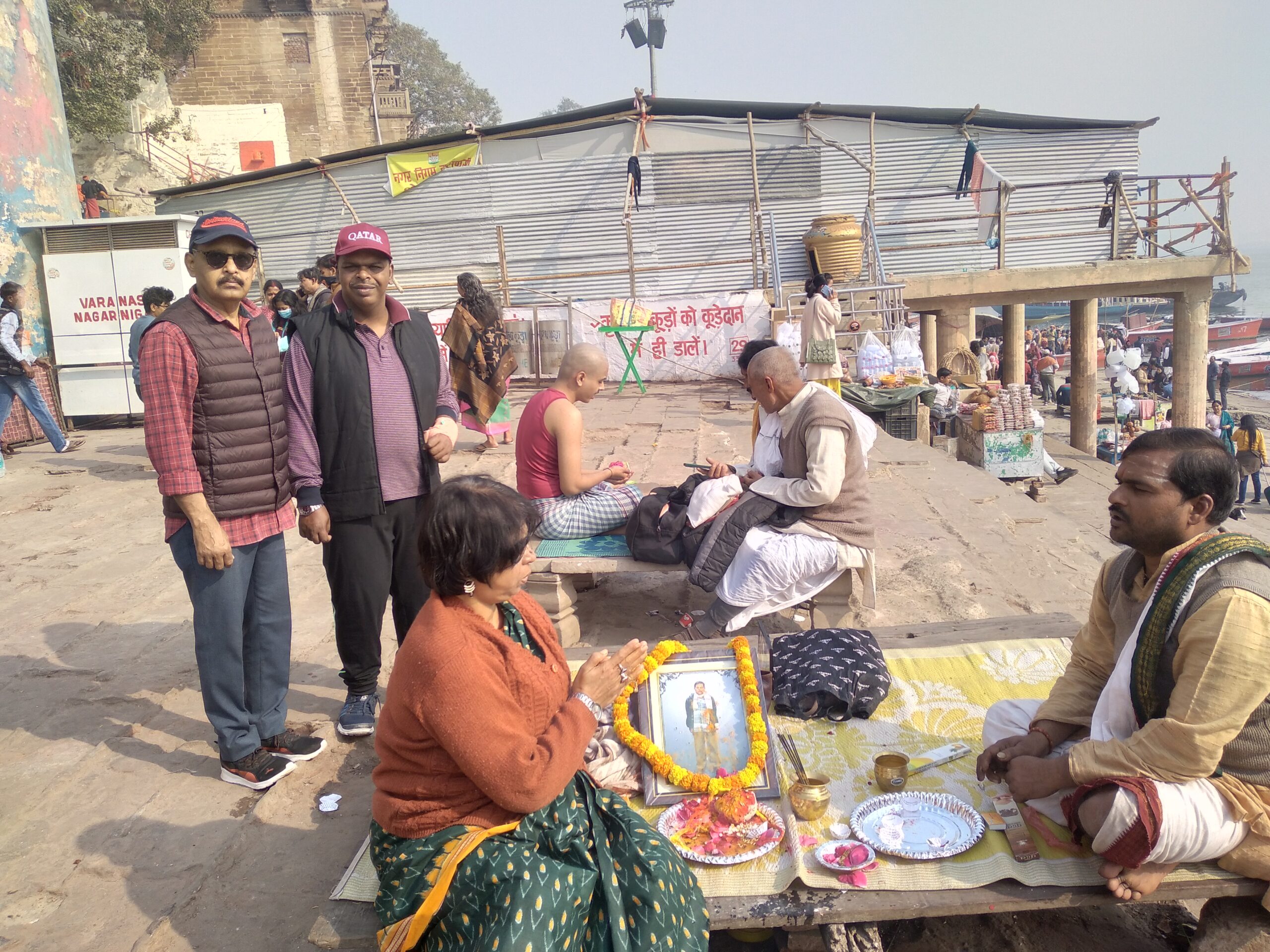 After a 10-minute drive, I had to get down from the toto about 400m from the Vishwanath Temple’s Gate 4 as no vehicles are allowed beyond that point. I made my way through thousands of devotees walking towards the gate and had to stand in the queue. After almost two hours, I finally reached the gorbhogriho. Well, a visitor gets only a few seconds’ time to see the jyotirlinga, one of the 12 jyotirlingas in India. The temple has a central dome and two spires called shikharas. The other that rises over the Vishveshvara linga was plated with gold by King Ranjit Singh of Lahore in 1839.

The present structure, which is popularly known as the Golden Temple because of the gold used in the plating of its spires and domes, is believed to have been built in 1780 by Ahalya Bai of the Holkar dynasty. It had been demolished by several Muslim rulers; Mohammad of Ghor was the first one to destroy the temple in 1198.

As I finished my darshana of Lord Shiva, hailed as Vishwanath or the Lord of the Universe, and came out I realized pilgrimage to this tirtha has been an important unifying force, not only for sects and religions, but for the wider Hindu perception of what constitutes the land of India.

Located adjacent to the Vishwanath Temple, the darshana of Vishwanatha always accompanies the darshana of Annapurna. The name ‘Annapurna’ means “She of Plenteous Food”. She is the one who fills her devotees with food. The image of Annapurna within the sanctum is a new one, established and consecrated in January 1977. Devotees are offered free meal at this temple from 10am to 5pm every day. 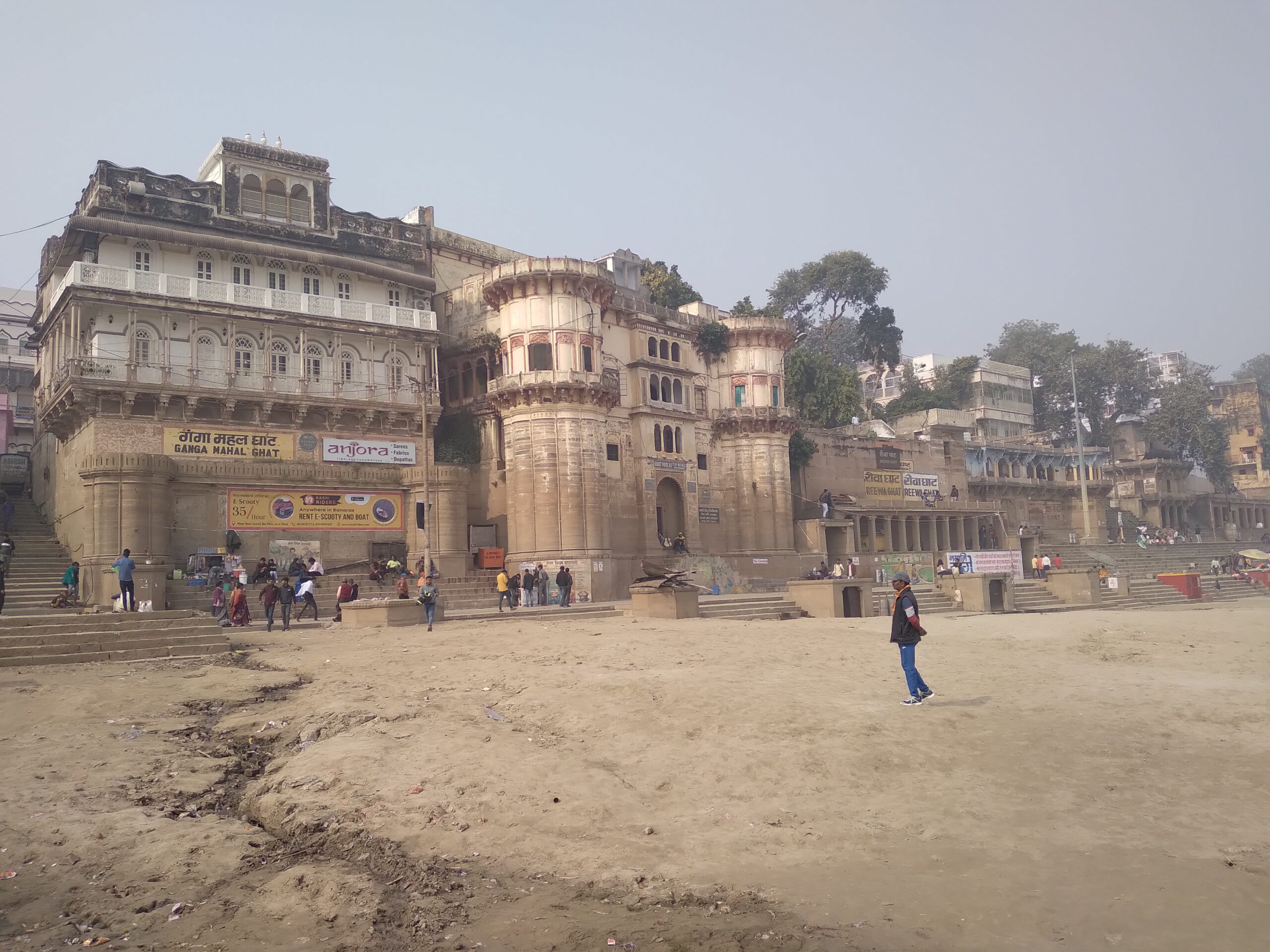 My idea about Dashaswamedh Ghat, just 550m from Annapurna Temple, was formed by Satyajit Ray’s film Aparajito (1956), in which Ray portrayed the ghat with minute details with pilgrims offering pujas, priests performing rituals of chanting and bell-ringing through a haze of incense. It’s at this ghat we see a frail and weak Harihar falling down while climbing up the steep stairs. The famous death-scene of Harihar crossed my mind: As Harihar’s soul departs his body, a huge flock of pigeons takes flight, accompanied by the falling notes of a flute playing a melody based on raga Jog.

Dashashwamedh Ghat was earlier known as Rudrasaras in Indian scriptures. Lord Brahma performed “ten ashvamedha” sacrifices, the requisites for which was supplied by King Divodasa, at Rudrasaras and installed two Shivlings. The place was later renamed Dashashwamedh Ghat. 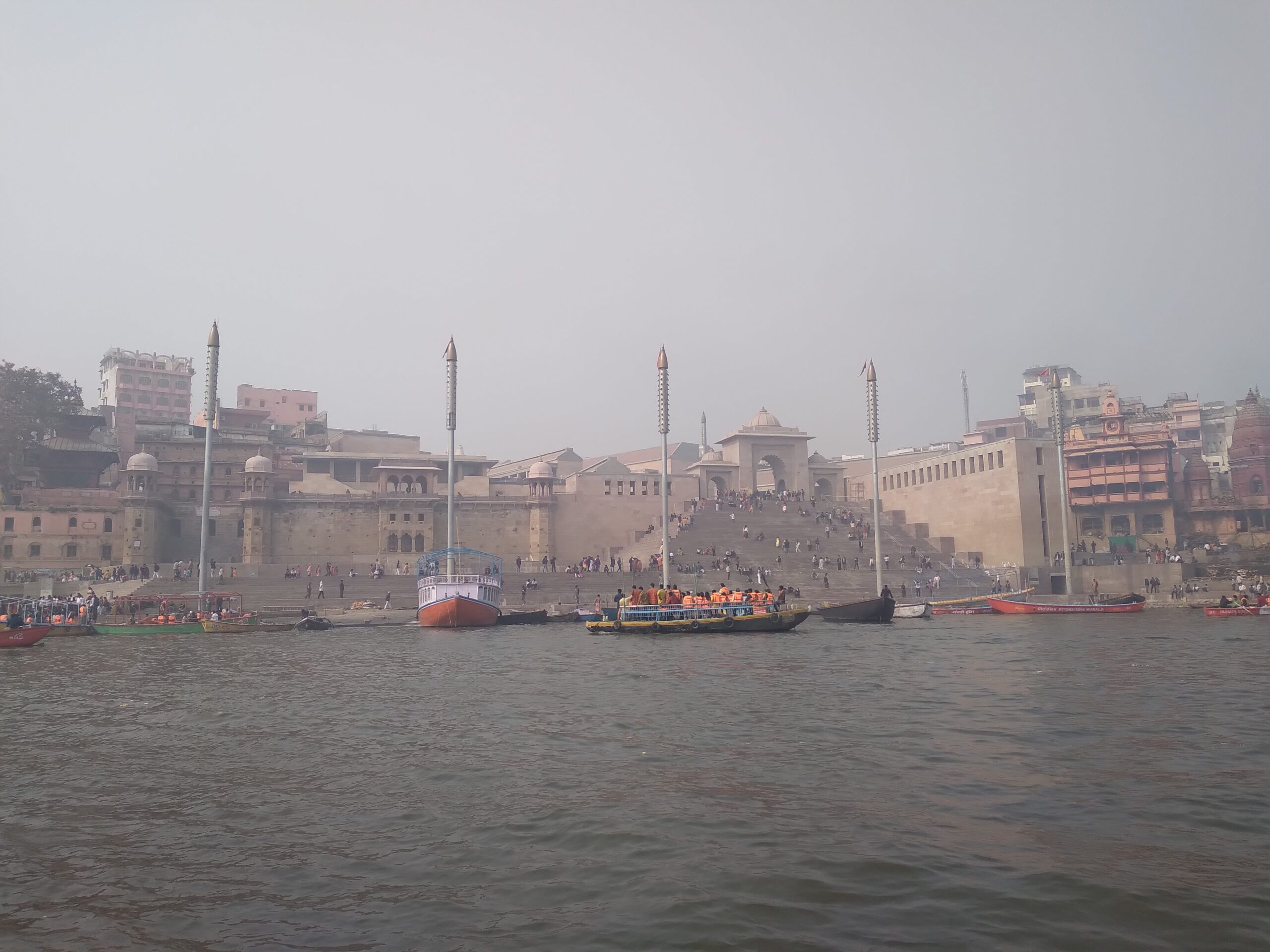 A view of Kashi-Vishwanath Temple corridor from the river Ganga

While Manikornika Ghat is said to be the oldest ghat in Banaras, visitors’ footfalls are maximum at the Dashashwamedh Ghat and it is the most popular ghat attracting huge crowd of bathers at dawn. It is also the bustling hub of the pilgrim business along the riverfront. Rows of pilgrim-priests sit on their low wooden chaukis under bamboo-umbrellas, eager to minister to the priestly needs of the pilgrims.

There are two adjacent ghats that today bear the name Dashaswamedha. The main road leading from Godowlia crossing to the river forks to either side of the Dshaswamedh market, one of the largest markets of this temple town. The two forks reach the river a short distance apart and turn into long stairways broadening out as the steps descend into the river. 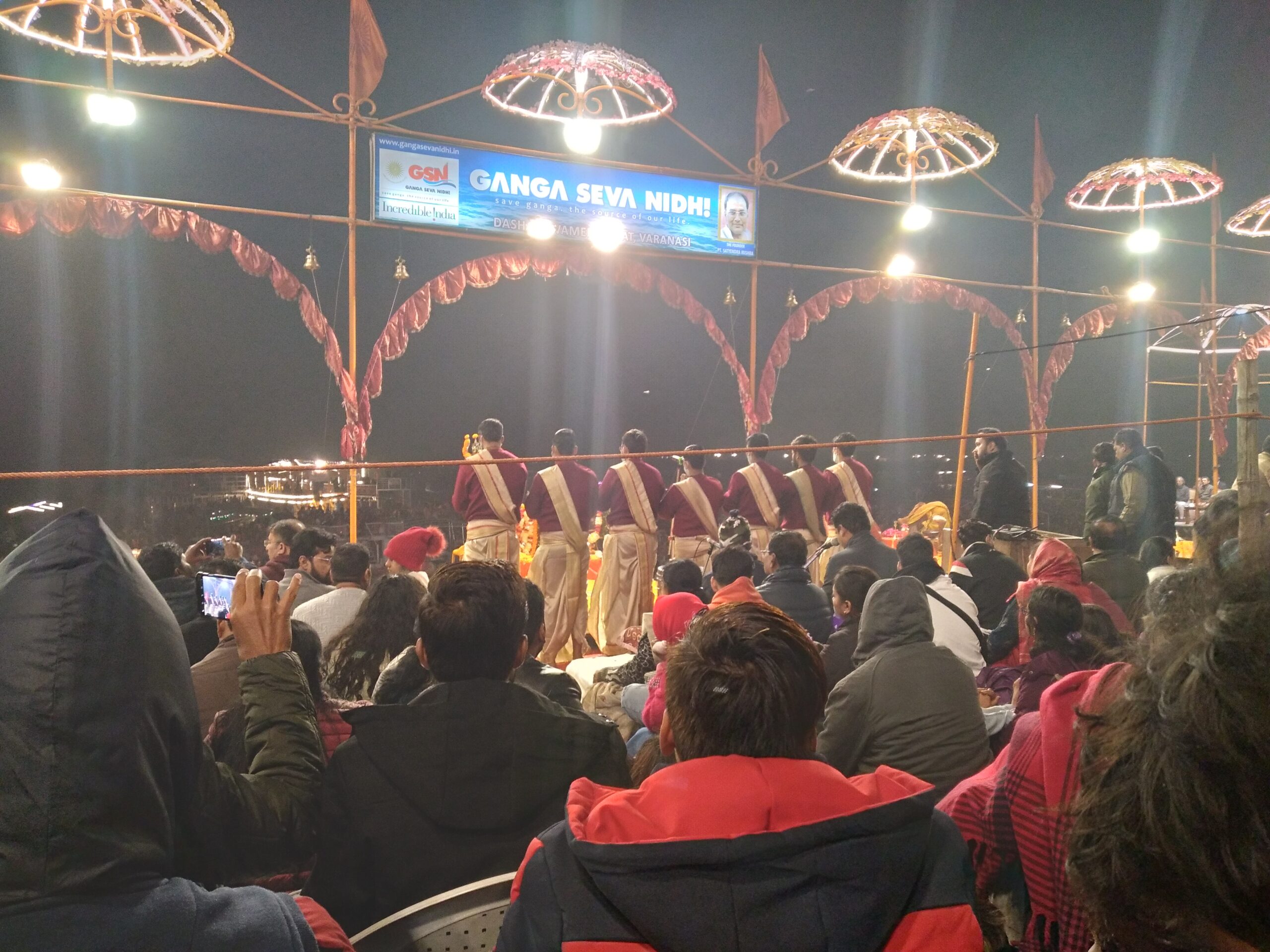 Ganga Aarti performed every evening at this ghat has unique vibes and energies. Huge crowds start assembling even from 4pm to get a closer view of the event. The aarti starts from 6pm and continues until 7pm.

As the crowds melted away following the aarti, Ganga Seva Nidhi workers get down to work to clear the staircases where chairs were placed for visitors. The Ganga aarti is a shining beacon of spirituality and devotion.

Even though I wrapped up my tour of Banaras, I felt like the pilgrim described in the Padma Purana: “Making a pilgrimage there in Banaras every day for a whole year, still she did not reach all the sacred places. For in Banaras there is a sacred place at every step.” 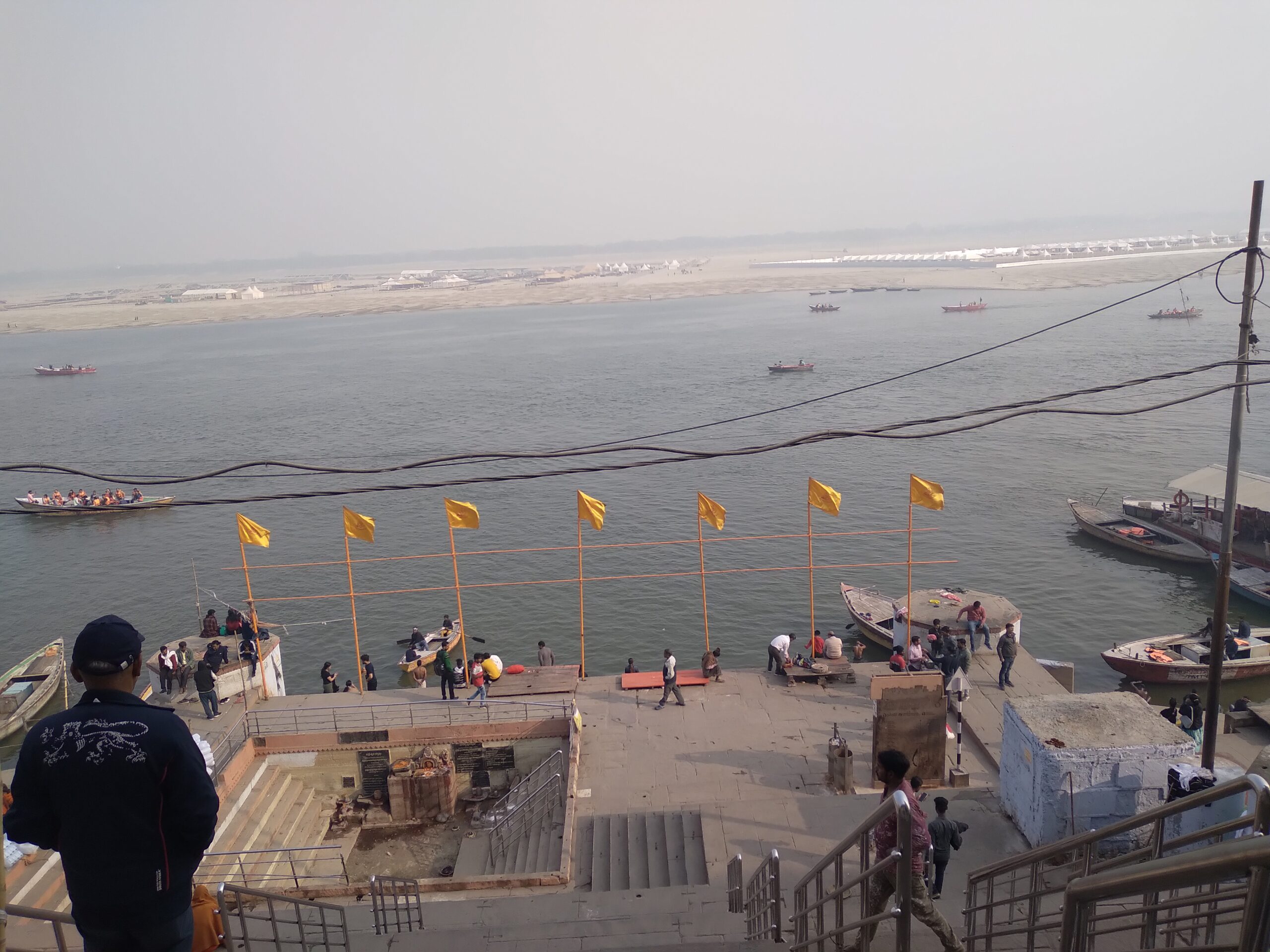