Nelson Mandela once said: “Destroying any nation does not require the use of atomic bombs or the use of long-range missiles. It only requires lowering the quality of education and allowing cheating in the examinations by the students…

The above messages are brutally true in the context of Bengal’s appalling state of education!

Bengal, which used to lead the country from the front during pre-Independence days, has now fallen into a gutter, recovery from which seems almost impossible unless the current leadership is shown the door. Well, the ‘fall’ had begun from later years of the Left regime which ruled the state for over three decades. But, at least, there was some semblance of respectability toward true academicians. Merit and unblemished experience were given preference then in matters of appointment in most cases.

Unfortunately, over the last 11 years, the education sector is neck-deep in corruption and is run by thoroughly corrupt, uneducated politicians and their lackeys aided by bumptious bureaucrats. The recent recovery of huge cash and ornaments from former education minister Partha Chatterjee’s aide’s houses speaks volumes for the extent of that filth, corruption and nepotism.

Sadly enough, the Bengali intellectuals, barring a few, have remained strangely silent and mute spectators to the current malaise afflicting the education sector. (We may recall the leadership efforts of German intellectuals– Karl Jaspers, Thomas Mann, Friedrich Meinecke, and Bertolt Brecht– and their contributions to post-war cultural reconstruction.)

The reasons for Bengal’s collapse of education, however, aren’t far to seek. From admission to colleges and universities to recruiting teachers, political influence, money and tolabaaji (extortion) are playing a major role. The faceless and shameful ‘buddhijibis” (including poets, writers, artists, theatre personalities and musicians) have been blatantly purchased by the powers-that-be: they’ve been given numerous facilities and rewarded with all kinds of “…bhushans”. Filmmaker Anik Dutta has rightly pointed out that the word “buddhijibi” now sounds like an ‘abuse’. It’s truly deplorable that the Bengali intellectuals are still keeping mum over the spate of allegations against the former education minister and have never condemned the current corrupt leadership and come out on the streets to show genuine concern for or stand by the agitating job-seekers who have been holding dharnas over the past 500 days braving police torture, sun and rain.

Ironically, these are the ‘buddhijibis’ who took to the streets during the Nandigram massacre in 2007.

The ‘buddhijibis’ have a crucial role in the fight against corruption as they can demand accountability and transparency from the government. While the masses are appalled by the deep-rooted corruption in the sphere of education in Bengal, these spineless and sycophantic intellectuals have remained silent and are waiting in the wings to jump the ship.

Bengal badly needs outspoken, upright and intrepid writers like Nabarun Bhattacharyya whose writings often brought him in conflict with the powers-that-be and who till the end remained a fearless voice against the power and corruption. 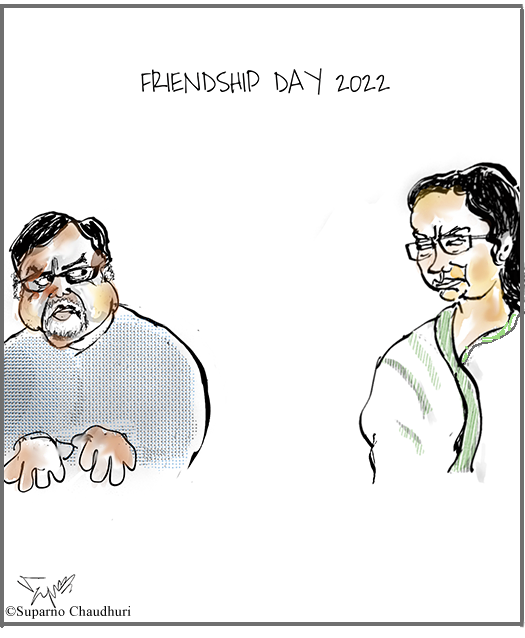